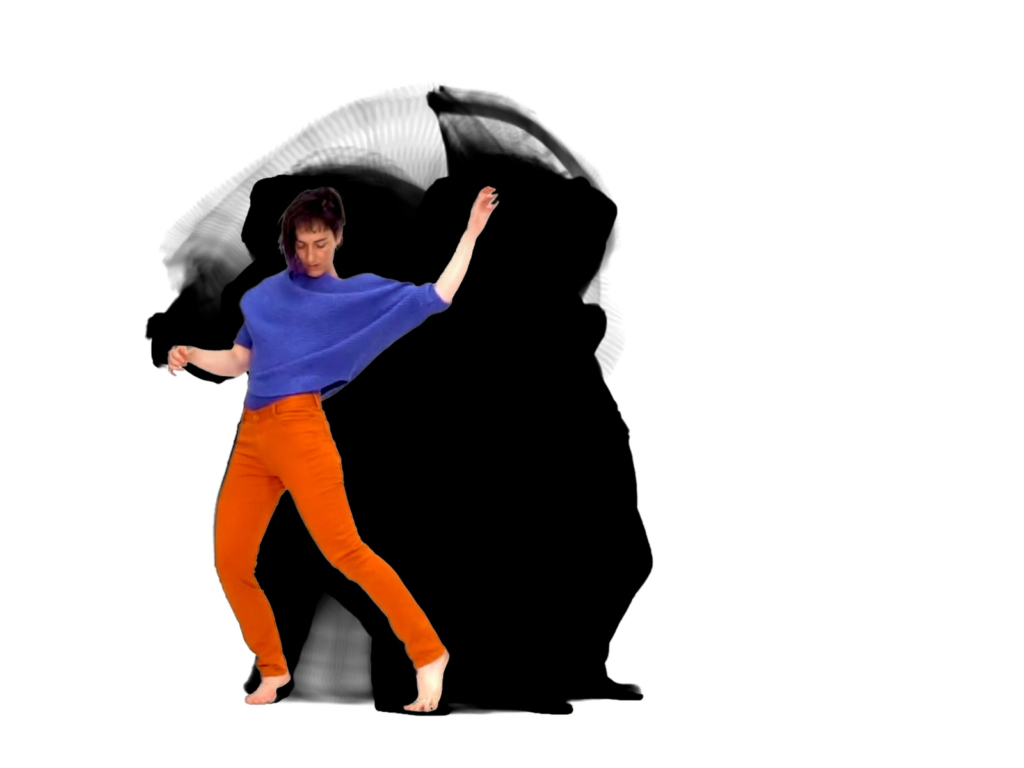 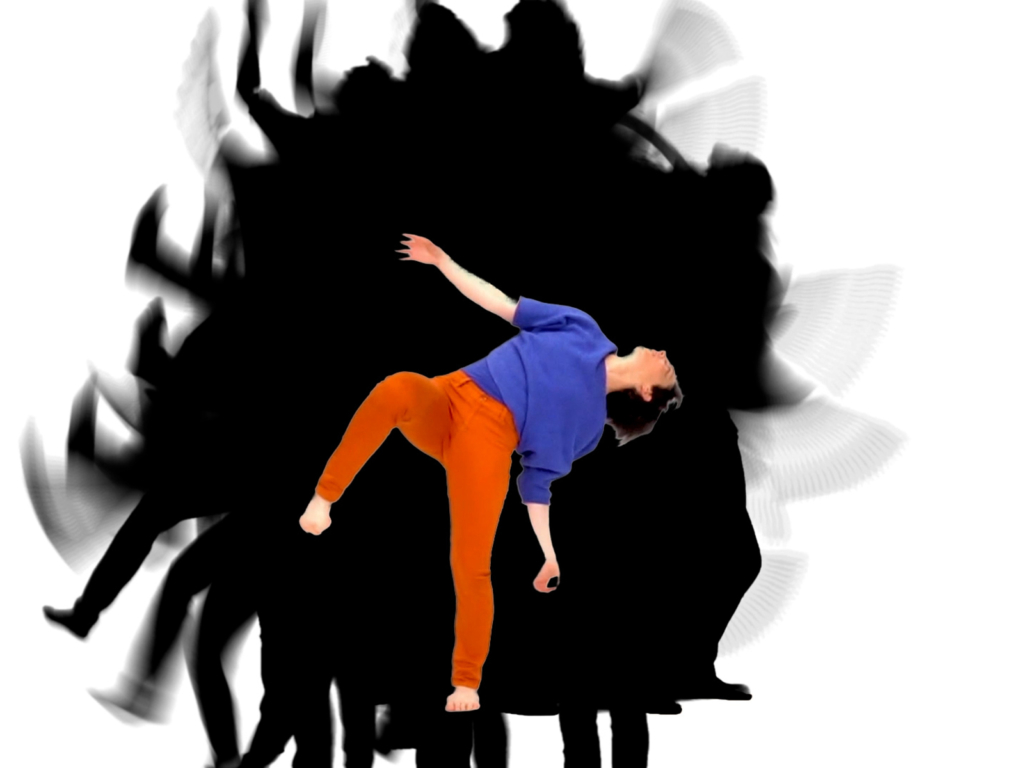 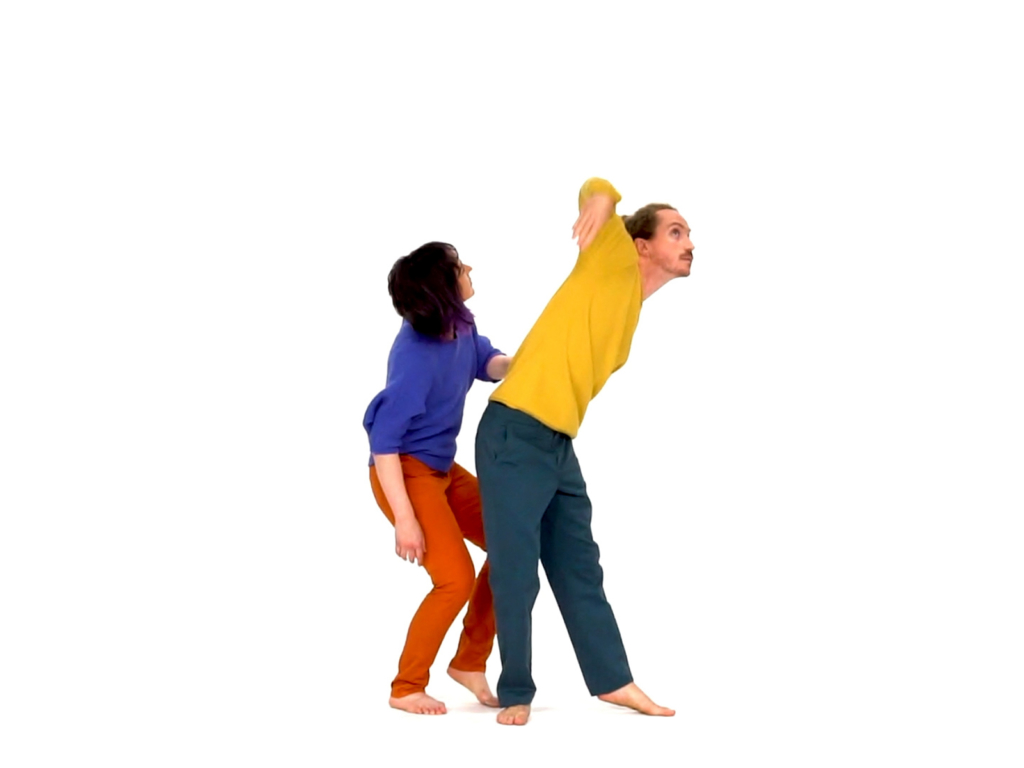 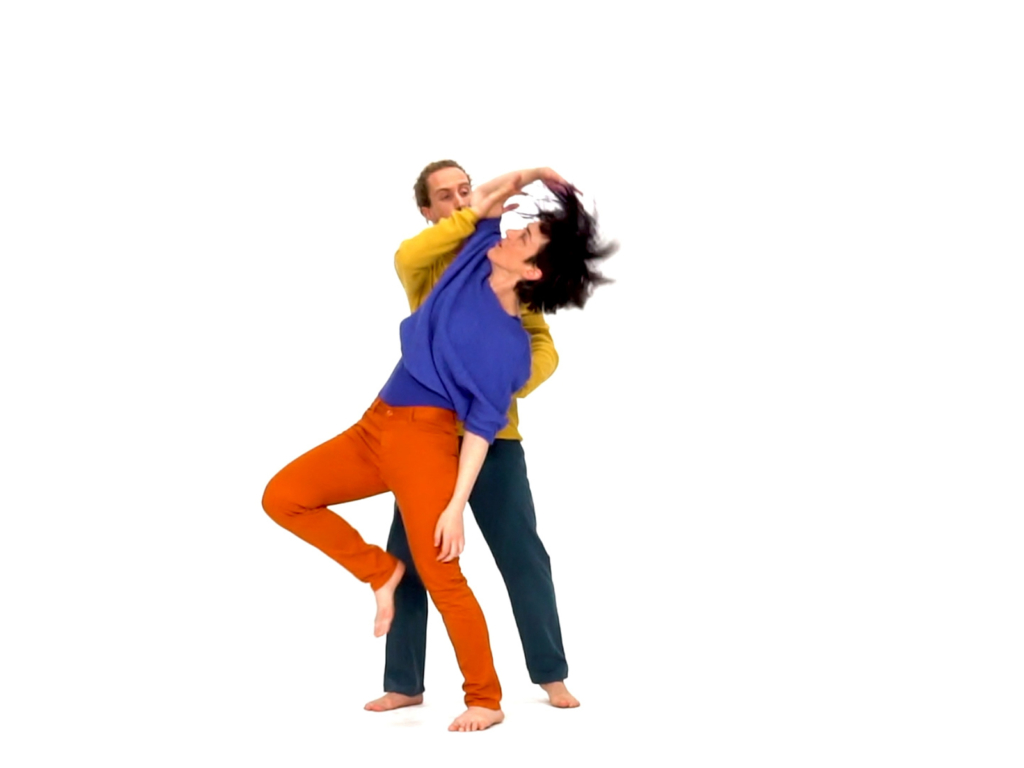 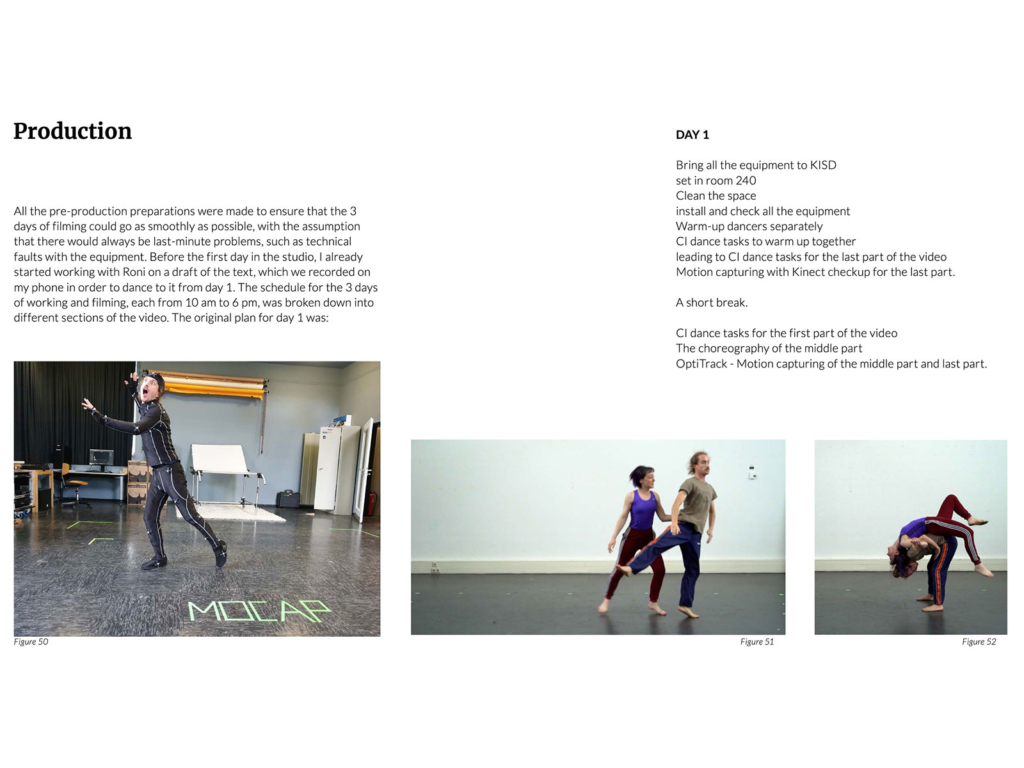 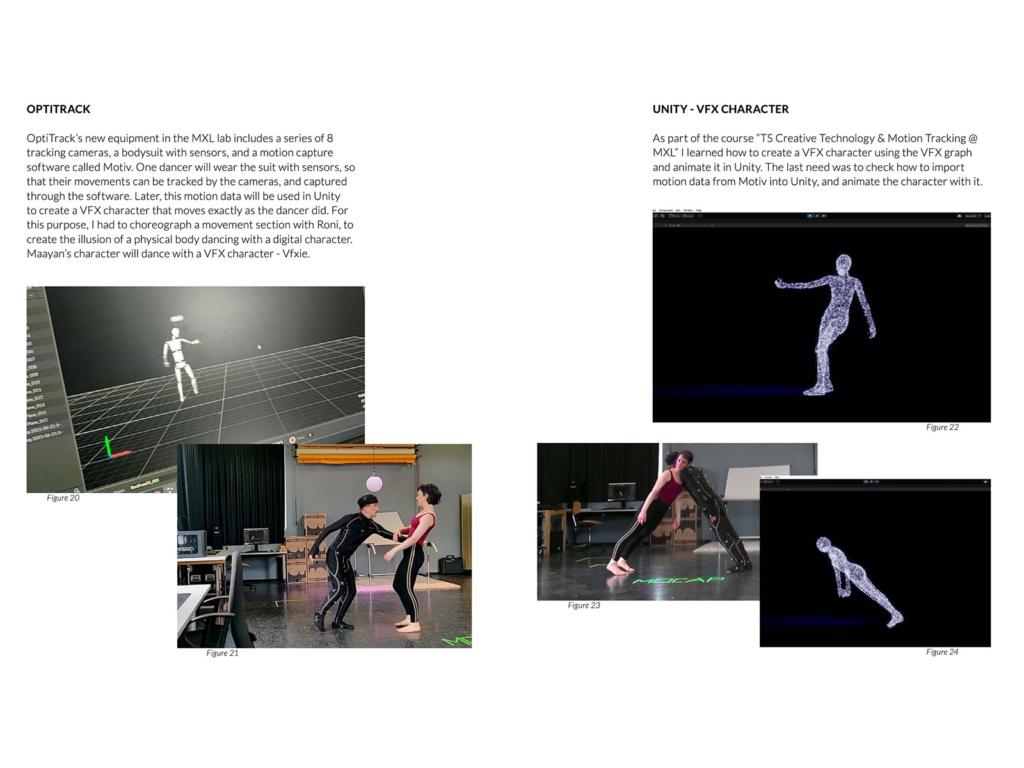 Maayan Reiter’s Intermediate “Shut-Up and Listen” shows a video dance that emphasizes a universal need of all people: the need to be heard. Two people engage in a dialogue in words and dance.

The video dance will be screened as part of the Moovy Dance Film Festival on Sunday, 24 April 2022, at 7 pm in the Filmforum at Museum Ludwig.

The Festival on Insta: @moovyfest

When we are in pain, the mere fact that another person is listening with empathy can make a difference. If we don’t expereience this kind of listening, we often end up in more pain than before. In this video dance, Maayan Reiter wanted to depict the importance of mutual connection between people and at the same time encourage reflection.

In her piece “Shut up and Listen” (3’49”) she is addressing questions like:
How can we use our bodies in order to expand our ability to listen to one another?
In what ways can physical movement convey what we wish to express?
How can movement help to underline the dynamics of a dialog taking place and show our need for connection and mutual support?

Supervised by Prof. Nina Juric in the integrated design area of Image & Motion within the technical framework of the Motion Experience Lab, this work asks questions of performance and performativity by choosing, choreographing and editing on an analog-digital process pipeline with audio-visually aligned and captured movements as practice based communication design research methodology: using two people, a dialog, contact improvisation scenes and motion capturing to investigate these question on an experimental timeline, in which the communication designer is also the performer.

“Shut up and Listen” – Making of

Maayan Reiter in an interview with Dr Nina Juric

How did you concept your framework for this piece and why?

I wanted to explore how certain themes of verbal communication based on NVC principles can be translated into physical movements of contact improvisation. The research took place in a dance studio where I explored these themes with another dancer and documented the process in videos. In addition, I further investigated dance principles by using creative tools such as motion capturing to visually illustrate how the physical laws of human touch allow for movements that are impossible to perform alone.

My original idea was to use only movement and dance as a substitute for verbal language, to overcome difficulties we experience in misunderstandings and conflicts. During my research, it became clear that in order to communicate a specific idea to a viewer, rather than representing a dynamic only through the body, voice should be used as well.

I aimed for the movement to be completely in tune with the spoken word. I wrote a dialog for the dancers that directly relates to NVC principles. The dance alone, without the text, could be understood by an experienced eye in dance and movement, but would most likely not stand on its own for someone unfamiliar with observing dance. I decided to create a storyline in which the movement of the contact improvisation dance would emphasize the text, and highlight the beauty and absurdity of the situation. The physical exploration of movement was the first step, in order to examine what it means to listen, not listen, be heard, or not be heard through the movement of the body, and how the need for human connection can be demonstrated.

How did you struggle and finally succeed concerning “body work meets technology / contact impro vs. post-production”?

The movement research was conducted under two different aspects: the physical exploration of body movements in the dance of contact improvisation and the technical research of transforming a physical body into a digital character using motion capturing and tracking techniques.

In order to explore these, I decided to work from both sides of the screen – both as the director/choreographer as well as one of the dancers in the duo. That way I could be as precise as possible to efficiently find what I was searching for, as I could physically look for it in a direct way.

Since the entire dance is filmed and shown in a two-dimensional video, I had to define the space we were using and the directions we look at. In terms of composition – to create clarity for the viewer, each of the dancers was on a different side of the frame. We would not move around but stay in one spot, facing diagonally to the camera. The aim was for the viewer to focus on the movements and the connection between the two dancers.

How did you work practically in the Motion Experience Lab and with what tools / software?

While working on the Intermediate project, I also participated in the technical seminar “Creative Technology & Motion Tracking @ MXL” and was able to test and learn how to work with motion capture technology, as well as create a visual effects character in Unity.

I used OptiTrack’s new equipment in the MXlab which includes a series of 8 tracking cameras, a bodysuit with sensors, and a motion capture software called Motiv. One dancer wore a suit with sensors, so that their movements can be tracked by the cameras, and captured through the software. Later, this motion data was used in Unity to create a VFX character that moves exactly as the dancer did. Through the course, I learned how to move the VFX character using the VFX graph and animate it in Unity.

Additionally, I captured movement using Microsoft’s Azure Kinect which is a camera that uses depth and advanced AI sensors for computer vision. I was using Azure Kinect to create a point cloud from the depth image, while implementing visual effects, and capture it in real time on the moving characters.

The final edit got rid of the vfx-scenes, which you originally aimed for. What were you actually working out here and what brought you now to this decision to let these scenes out and make a re-edit?

Initially while working on the Intermediate, there were two separate parts: the dance on camera, and the VFX-scene. For the purpose of the research, I knew that the first part of dance on camera would completely cover my research and I would be able to reach a wanted outcome.

However, since the Intermediate is not yet my final thesis, I also saw it as an opportunity to experiment and learn new territories that are unfamiliar to me – more as a staircase hallway rather than a final destination to develop my skills as a designer.

I was excited to learn and use the new equipment of motion capturing and tracking in the MXlab and it fitted my concept very well, though I had no experience or knowledge of it beforehand. I knew it would be a huge challenge to achieve the visual result I aimed at, and that it might fail in the given time I had. My idea was to convert one of the characters to a digital figure   to communicate the idea of connection not necessarily through physical touch, but also to show the need through metaphor. It was clear the idea was too ambitious, but while taking into account that the outcome would not be “perfect” I still thought it was a great opportunity to experiment, in order to also continue exploring these technologies further in the future.

In the outcome I showed in the Intermediate exam, I reached a result that included all that was planned, including the VFX-scene, that I was satisfied with for the time and process I had, but not visually professional enough to my taste in order to publish it publicly. After the exam, I had taken a break and looked at the outcome with fresh eyes, and re-edited the video in a way that would best serve the content.

Thank you Maayan for sharing your insights about your concept and design process!
Enjoy your clip at the festival.

The intermediate work documentation can be found here.